It has been said that it is a form of mental degenerate disorder to keep on doing the same thing over and over again and expecting a different result each time. This is the case with the Nigerian Capitalist class who have over the past 23 years have followed loyally the anti-people dictates of their imperialist masters.

The results of the impositions of all these anti-people (mis)policies have been devastating on the masses. It is been misery without end – poverty, disease, unemployment, homelessness, etc. There has been no time in history where thing have been these terrible for the masses. Yet the Nigerian ruling elites, bourgeois, through its Government keep on talking about continuing with more attacks on the masses.

Again we are back at the ‘good old days’ where fuel scarcity reins and we are gradually losing count of the number of times fuel prices have been increased. Prices of kerosene diesel, aviation fuel, etc have been deregulated.

In February, the Yar’Adua regime reduced the price of petrol to N65.00 and declared that the downstream of the oil sector is deregulated in March. We said then that it was a trick to prepare the ground for a major assault on the masses. The leadership of the oil workers NUPENG and PENGASSAN also declared that it was deregulation via the back door. 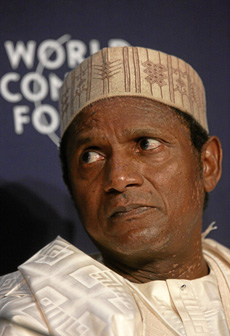 It is not a new thing in Nigeria, that when a new administration is sworn into office, they always come up with some "new" policy or other. The experience of the Structural Adjustment Programmes (SAP) introduced by the Babangida regime is still fresh in our memory. The Obasanjo regime came up with the "Fight Against Corruption" crusade, and to achieve this they set up the EFCC and ICPC. How far have they gone with this crusade is left to the Nigerian people to decide. On August 1st 2007, the present (Yar'Adua) regime came up with its own policy, named the "Seven Point Agenda", which we look into below.

According to the government the following are the seven goals it has given itself:

Power and energy - To develop an adequate power supply so as to ensure Nigeria's ability to develop as a modern economy by the year 2015.

Food security - The emphasis is on the development of modern technology, research, financial injection into research, production and development of agricultural inputs leading to a 5 to 10-fold increase in yields and production. This is supposed to result in massive domestic and commercial output and technological knowledge transfer to farmers.

agricultural and solid mineral sector. This requires Nigerians to "choose" to work, as hard work by all is required to achieve this reform.

We are told that today "democracy rules" in most of the world. Where there were formerly military dictatorships now we have civilian rule, elections, parliamentary democracy and so on. The truth is far more concrete!

In Pakistan Musharraf has gone, and now there is an elected government. But no one should have illusions about the elections being "fair and free". There was blatant rigging, as we reported in Pakistan: PPP confirms blatant fraud in elections and Massive fraud! - An Eyewitness Account. It was clear that imperialism was pushing for a coalition government, and hey presto the results fitted just right.

In Mexico there was electoral fraud on a grand scale in 2006, which led to the massive mobilizations in the Zocalo Square in Mexico City, with up to three million taking part. The masses rightly see the present government as illegitimate.

In Nigeria last year, again there was fraud on a grand scale, in fact on a scale never seen in the past. The leaders of the western powers may fool themselves that there is real democracy in Nigeria or, to put it better they fool the general public that that is so. The masses in Nigeria know full well that the elections were not fair. They know that there was blatant fraud, stealing of ballot boxes, falsification of results, physical threats and even murder.


By the Workers’ Alternative Editorial Board
Friday, 11 May 2007

Special Mayday Editorial Statement by the Workers’ Alternative Editorial Board
Labour must act now! Demand an end to "reform"! For socialism!

Fraternal greeting to all workers on this special day for workers. Mayday has come to be a very important date in Nigeria and to workers in particular. Traditionally this day is very important to the working class movement internationally. It is a day of international solidarity and its origins are in the struggle of workers for improved living conditions.

This year's Mayday comes at a very critical period in the history of the Nigerian working class movement, a period of growing hardship, turbulent instability and an urgent need for a programme of action by the workers.

However, it is quite commendable that both the leadership of the NLC and TUC agreed to have a united Mayday rally this time around, instead of separate rallies. This should be a step towards uniting the Nigerian workers as the strength of the working masses lies in their unity. This is an essential ingredient now in the face of the problems facing the working masses.