Declaration of the International Marxist Tendency 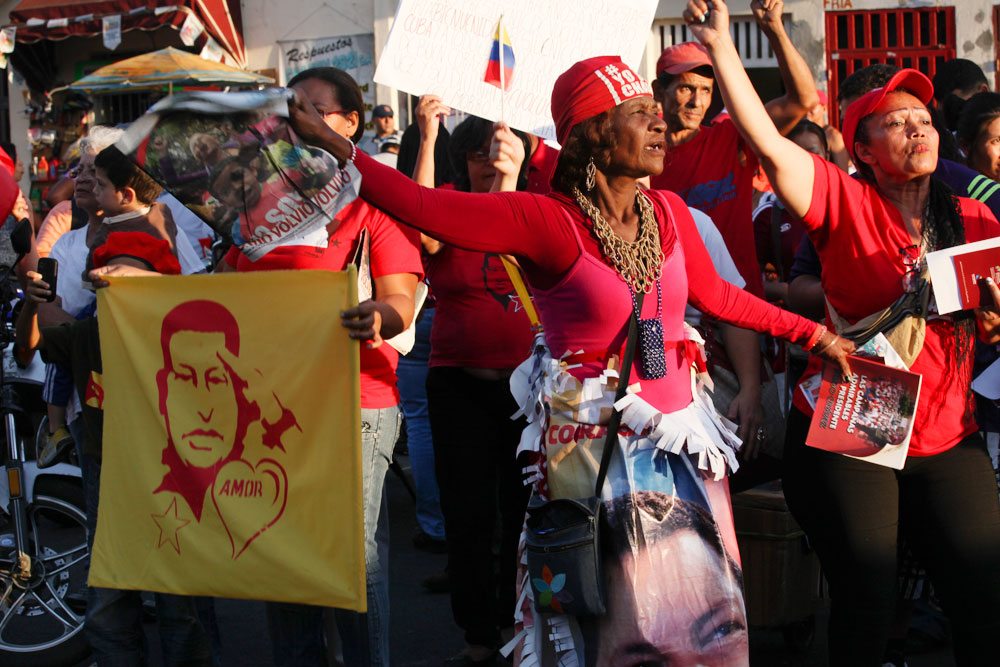 As soon as the death of the president was known, people started to gather in the Bolivar squares in the centre of cities and towns across the country. There are many reports of people breaking into tears in the streets or falling silent. Crowds of distraught people gathered outside the military hospital in Caracas where he died.

The spontaneous outpouring of grief soon turned into a mass demonstration of defiance. As on so many occasions when the Revolution was threatened, the people have taken to the streets of Caracas.

The reason for this outpouring of support and emotion is not difficult to understand. In the eyes of the masses Chávez represents the revolution, their own awakening to political life, the battles waged in the last decade, the feeling that for the first time ordinary working people and the poor were in charge. He represents the man who stood up to imperialism and the oligarchy.

Some superficial bourgeois commentators say that the masses loved Chávez because he ensured improved living standards through the misiones social programs. That of course plays an important role. But it goes beyond that, these social achievements, and they are impressive, were won through struggle, the masses had to mobilise en masse in the streets on several occasions to defend the revolution from the counterrevolutionary oligarchy and imperialism. This is what solidified the relationship of the masses with the president.

Let us not forget that not all were crying last night. In the upper class neighbourhoods in the East of Caracas many were beeping their horns and in Miami, the reactionary escualidos were openly celebrating. The ruling class and imperialism hated Chávez and wanted to get rid of him as quickly as possible, and for the same reasons that the masses supported him.

Demonstrations of grief at the loss of Hugo Chávez were not limited to Venezuela. Throughout Latin America workers and peasant and their organisations expressed their appreciation for the revolutionary leader. Even beyond his own continent, support has been coming from left wing and progressive organisations.

Last night in Caracas and many other cities, the people were chanting: “We are all Chávez ” and “ Chávez lives!” Thousands have gathered in Bolivar Square and marched towards the Miraflores presidential palace, shouting slogans of defiance, “the people united will never be defeated”, “they shall not be back” and “the struggle continues”.

That is the most important thing of all. The masses know that they are in a war, and in war, no matter how many soldiers fall in battle, others will step forward to take their place. Whatever happens, the struggle will continue. That is the message from the streets of Caracas and every other city, town and village.

With all our hearts we sympathise with this honest grief of the people who are weeping openly in the streets of Caracas.  The tears shed by workers and poor people are sincere and express a pure and honest feeling. But as well as the real tears of the masses there are others who are weeping crocodile tears.

The British Foreign Minister William Hague said he was “saddened” to learn of the death, saying Mr Chávez had left a “lasting impression” on Venezuela. The BBC this morning was forced to admit: “He won enduring support among the poor and repeated election victories by using Venezuela's oil wealth to pursue socialist policies.” (BBC News 6 March)

How strange! Those who hated Chávez and did everything possible to undermine him when he was alive  join in a cynical chorus of praise now that he is dead.

The real attitude of the imperialists is expressed by the declarations of Ed Royce (Republican, California), the chairman of the US House Foreign Affairs Committee, who said in a written statement: “Hugo Chávez was a tyrant who forced the people of Venezuela to live in fear. His death dents the alliance of anti-U.S. leftist leaders in South America. Good riddance to this dictator.”

We will have nothing to do with hypocrisy, insincere words and empty rhetoric. We mourn for Hugo Chávez  but we must not be blinded by tears. We must not allow ourselves to be pushed off course. When the mourning is over, the fight must continue. Chávez would expect nothing less. Hugo Chávez was a fighter. If he could speak, his words would be those of Joe Hill, the Swedish-American revolutionary: “Don't mourn. Organize!”

The manoeuvres of imperialism

U.S. officials lost no time in presenting Hugo Chávez's death as an opportunity for America to rebuild a relationship with Venezuela and for the country itself to pursue “meaningful democratic reforms," with President Obama heralding a “new chapter” in the Latin American country's history.

They described the death as a “challenging time”. But they did not say who was being challenged, or for what Washington has reaffirmed what it described as its “support for the Venezuelan people”. It did not say what people. It says it is interested in developing a constructive relationship with Caracas. But it did not specify the nature of this relationship.

When Obama speaks of “meaningful democratic reforms," he means the unravelling of all the social, economic and political conquests of the past fourteen years. When he speaks of a “new chapter” in Venezuela's history, he means a return to the old tragic chapter of history when Venezuela was enslaved to the interests of US imperialism and the big oil companies.

These siren voices from Washington will fool nobody. When they speak of “support for the Venezuelan people,” they mean support for the counterrevolutionary opposition, the bourgeoisie and the section of the Bolivarian Movement that favours a deal with the latter.

These words are intended to win over the right wing of the Bolivarian Movement . Those who for years have been dreaming of “chavismo without Chávez"  now see their chance. This tendency represents neither more nor less than the Fifth Column of the bourgeoisie in the Bolivarian Movement. They are the most dangerous enemies of the Revolution.

The enemies are already attempting to take advantage of these tragic circumstances to spread confusion and intrigues against the Revolution. We pledge ourselves to continue and intensify the fight to defend the Bolivarian Revolution against its external and internal enemies. Of the two, the latter is the more dangerous.

Hugo Chávez died before completing the great task he had set before himself: the carrying out of the socialist revolution in Venezuela. It is now up to the workers and peasants – the real motor force of the Bolivarian Revolution – to carry this task out to the end. Failure to do so would be a betrayal of his legacy.

Foreign Minister Elias Jaua said that new elections will be held within 30 days. Nicolás Maduro will be the candidate of the United Socialist Party (PSUV). It goes without saying that the Marxists will fight for the victory of the PSUV and the defeat of the counterrevolutionary opposition. But at the same time we must ensure that the next government will carry out a socialist policy.

There is nothing more dangerous than the idea of national unity and reconciliation between the classes. There must be no deals with the opposition and no concessions to the bourgeoisie. There can be no unity between slaves and slave owners, peasants and landlords, workers and capitalists, exploiters and exploited, oppressors and oppressed.

For the last two months the oligarchy, taking advantage of Chávez's illness in a disgusting way, have redoubled their campaign of economic sabotage, hoarding and speculation. The government has promised to take swift measures. The only real answer is the expropriation of the ruling class which controls the production and distribution of food, large sections of banking and key levers of the Venezuelan economy.

Nicolás Maduro has promised to maintain Chávez's “revolutionary, anti-imperialist and socialist legacy”. The working class and the rank and file of the PSUV must ensure that this is the case. It is not enough to deliver speeches praising Chávez  which even his bitterest enemies are doing, now he is dead. It is not enough to make speeches about love, an empty phrase that signifies nothing.

What is needed is not sentimental speeches, but to put into practice the socialist programme that Chávez always advocated: the abolition of capitalism through the expropriation of the bankers, landlords and capitalists. That is the authentic legacy of Hugo Chávez  That is what we must fight to carry out.

But there is also another goal that Chávez proclaimed which still remains to be put into practice, a goal that he regarded as fundamental, but which was buried and forgotten by the bureaucrats: the creation of a revolutionary socialist International.

In June 2010, in the congress of the PSUV, Chávez proclaimed the urgent necessity of the Fifth International. He did not do this as an afterthought. He gave it a prominent place in his speeches because he considered it essential. He was quite right.

He died before being able to put this idea into practice. From the very start it met with hostility from the right wing of the Bolivarian Movement. It was anathema to the Stalinists and reformists who never shared Chávez's enthusiasm for socialism and did all in their power to sabotage, distort or water down all his plans, including a revolutionary International.

The International Marxist Tendency commits itself to carrying out the struggle to build such a revolutionary workers' International. We call upon all those who take the President’s words seriously to support us in this great historic task. Socialism is international or it is nothing.

The IMT expresses its sympathy with the people of Venezuela. The cause of socialism has lost a great advocate. The human body is a fragile thing. It is easy to destroy with a bullet or a disease. All humans are born to die. But there is no force on earth that can destroy an idea whose time has come.

Hugo Chávez the man is no longer with us, but his ideas live on. We pledge ourselves to do everything in our power to step up the fight for socialism in Venezuela and throughout the world. That is the only way forward; the only way to honour the memory of Hugo Chávez.

Carry out the legacy of Hugo Chávez, not in words but in deeds!
Expropriate the oligarchs!
Long live socialism! The struggle continues!
Workers of the world unite!