On September 26 the people of Venezuela will be electing a new National Assembly. The reactionary Oligarchy, backed by imperialism, is taking advantage of the shortcomings of the revolution to strengthen its position and prepare for the counter-revolution. The Venezuelan revolution has gone a long way, but key economic levers are still in the hands of the Oligarchy. What is required is to fully carry out the socialist revolution and expropriate the capitalists and landlords. That is the only way of making the revolution irreversible.

Read more: The elections in Venezuela – Defeat the counter-revolution and fight for socialism!

The work of the Pakistani Marxists of The Struggle has been noted, both by our friends in the labour movement and also our enemies. The work has been extremely successful. Unfortunately, in the course of building a principled Marxist tendency, some comrades can fall victims of opportunist adaptation. This is the case of former IMT member and ex-member of the National Assembly, Manzoor Ahmed. In this Statement of the EC of The Struggle we set the record straight on what happened.

On the night of March 24, 1980, Archbishop Oscar Arnulfo Romero was shot through the heart by killers, carrying out orders that came straight from the reactionary oligarchy that rules over the country. He was killed because he was giving voice to the needs of the oppressed. To this day justice has not been done and the masses are still waiting. 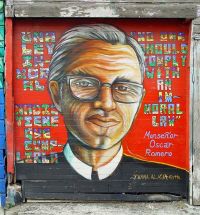