At the end of my article on the Russian elections I wrote: “What happened in Tunisia and Egypt can also happen in Russia.” Events have begun to move in that direction far more quickly than I anticipated. In the last few days the cities of Russia have been swept by mass demonstrations.

In Moscow at least 50,000 people gathered on Saturday to protest the rigging of the elections. Some estimates put the figure at anything up to 100,000. It is impossible to verify these estimates, but the photos published on the Internet show that they were massive. In Petersburg 12,000 people protested, the biggest demonstration since 1995. In Nizhny Novgorod, Krasnoyarsk, Vladivostok and many other cities there were smaller demonstrations of a few thousands.

This shows that a new mood is rapidly developing in Russia – an angry and defiant mood that will no longer be deflected by repression and official lies. At first the authorities tried to ban the demonstrations, using police violence to disperse them. The prostitute media, which is in the pocket of the Kremlin, attempted to suffocate the movement under a blanket of silence. But none of this worked. 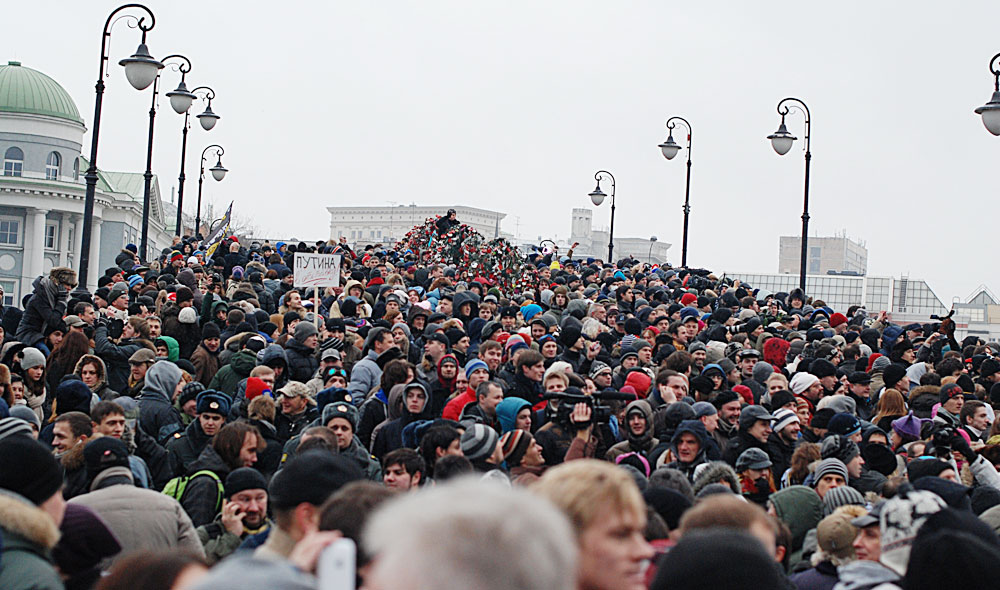 By Saturday the protest movement, especially in Moscow, had reached such huge proportions that it was impossible for the media to remain silent. The television was compelled to report on events that everybody knew were taking place. And the authorities belatedly lifted the ban, fearing a bloody clash, which would have created an explosive situation throughout the country.

What is the nature of this movement?

The composition of the protest movement, at least at this stage, seems to be mainly middle class people and the intelligentsia. There are not many workers at this stage, but there are many young people, students and school students. That should not surprise us. The movement always tends to begin with the students. That was the case in France in May 1968, and it was the case in Russia in 1900-1901. But that was the prelude to the 1905 revolution.

The initial impulse for the protest movement seems to have come from the leaders of the liberal parties who were wiped out in the parliamentary elections. But the composition of the demonstrations is by no means confined to these elements. Our correspondents in Russia report that there is a sea of red banners on the demonstrations. In Moscow the CPRF officially decided to participate in the protests (though not in Petersburg, it seems). Many smaller communist parties are participating, and also the anarchists.

The anger against Putin is not confined to the middle class. The workers are following these events with interest. They do not like Putin but they distrust the Liberals and politicians in general. And who can blame them? Putin is bad, but was it not these same Liberals who advocated a return to capitalism and the “free market economy” that has devastated the workers’ lives for the last two decades?

The Russian Marxist website 1917.com carried an article with the title Liberals scared by the wind of change, which accurately describes the class contradictions in the protest movement. It begins as follows:

“The winds of change have been blowing strongly through the city of three revolutions [Petersburg]. The city has not seen political mobilizations of this magnitude since the mid-90s. The police reported seven thousand participants in the rally in Pioneer Square. There may have been around ten thousand. In any case, it was an impressive sight: a snaking crowd of protesters streamed along the sidewalks of the area of the Insurrection Square, along the Nevsky Prospekt and Zagorodny Prospekt towards Pioneer Square.

“Most of the protesters came here firmly convinced of the inevitability of clashes with riot police, not knowing that the rally in Pioneer Square would in the end be allowed. The prestigious regional media programme ‘Dear citizens,’ urged people not to give in to provocations. Probably for some young people, this had the opposite effect. As a result, the radical character of at least the march, and possibly the entire rally surpassed the wildest expectations of even the boldest of the organizers, and this despite the fact that the organizers of the rally were made of the anti-system and non-parliamentary opposition.”

The article explains how the extreme right wing LDPR was kicked out of the meeting in Petersburg:

“The admission to the podium of Gulyaev, the representative of the LDPR, was put before participants of the meeting and he was driven from it amidst the whistling of the protesters [...]

“The representatives of the Communist Party and A Just Russia were second-line politicians, angry about their stolen mandates. In this case their dissatisfaction with the leadership of the party, especially the Communist Party, was clear from their speeches. The news of the nomination of Mironov the leader of A Just Russia for the Russian presidency was greeted with an indignant roar. However, the demands of the protesters that those elected [for the opposition] should resign their seats, went unheard since not one of the newly elected members were present.

“Moreover, the abundance of red flags and left-wing rhetoric scared the pants off the right wingers”

And the article ends with these demands:

The protest movement has begun as a movement of the middle class and the intelligentsia, but that can change. Once the Russian workers get on the move, everything will be transformed in 24 hours.

The Kremlin-controlled media has accused the demonstrators of being inspired and financed by foreign elements. This accusation has gained some credence by the declarations of Hilary Clinton and other American politicians who were quick to cast doubt on the validity of last Sunday’s elections. Senator John McCain tweeted “Dear Vlad, The Arab Spring is coming to a neighborhood near you.” This accusation has been taken up by some Left organizations in the West.

It is perfectly true that Washington is trying to interfere in Russia’s affairs. The CIA certainly has its tentacles in many front organizations, such as NGOs etc. Imperialism has tried to meddle in the independent trade unions through organizations such as the Friedrich Ebert Foundation.

Nevertheless, to maintain that the mass movement against Putin is all a foreign plot is childish nonsense. The anger against this corrupt regime does not come from abroad. It is the consequence of years of economic hardship for the masses while a small clique of biznismeny were enriching themselves by looting the state.

Ironically, it was not the foreign media but the Putin media itself that did far more than Hilary Clinton or the CIA to encourage the protests. By highlighting the protest movements in the West: the Spanish indignados, the strikes and demonstrations in Greece and Britain, the Occupy Movement in the USA, they gave young people in Russia the idea of coming onto the streets.

And Putin? He seems to be demoralised by this sudden turn of events. In the last few days he has been practically invisible. He has not appeared on national television to make his views clear to the Nation. Yet these events could hardly have come as a total surprise. The authorities increased the wages of the police before the elections, which was no accident. But the scale of the protests must have been a shock, and also the speed of it. They were probably expecting trouble nearer the Presidential elections next March. That may still turn out to be a correct assessment.

As I pointed out in may article on the Russian elections, this represents a sea-change in Russian society. The myth of Putin’s invincibility has been shattered. The people are on the streets. Millions who were apathetic and passive before are finding a voice and moving into action. Next Sunday will see new demonstrations. This time the authorities will not be able to ban them. They will be even bigger than the ones last weekend.

Even if (as is most likely) the regime manages to survive and the present wave of protests dies down, the presidential elections next March will be far more politicized and radicalized than heretofore. We will see a real struggle for power, which will not be limited to the ballot box or intrigues in the corridors of the Kremlin. The Russian people are beginning to awaken. And the Russian working class has not yet spoken its last word.