One year after the revolutionary overthrow of Ben Ali, Tunisia faces a wave of strikes, regional uprisings, sit-ins and protests of all sorts. For hundreds of thousands of Tunisian workers and youth who bravely defied the bullets of the dictatorship to get jobs and dignity nothing has fundamentally changed.

It is true that the dictator has gone, but the system which condemns the best of the Tunisian youth to a future of unemployment or emigration still remains. As a matter of fact, for many, the economic situation has only gotten worse.

Formal democratic freedoms, important as they are, have not given the Tunisian poor neither jobs nor bread. Since the beginning of the Tunisian revolution, unemployment has jumped from 600,000 to 850,000 in a country of 11 million inhabitants. In percentage it has gone up from 14% to nearly 20%. In the impoverished regions where the revolution started it is as high as 40 or 50%. 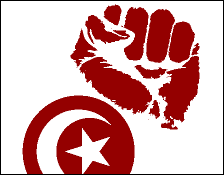 Unemployment is just the tip of the iceberg of a mass of social problems. A trade union activist from Gafsa explains the reasons for the growing feeling of frustration: “Since the fall of Ben Ali, not a single step has been taken to stem the sharp rise in prices, particularly of bread and medicine, nor to reduce regional inequalities and promote jobs.”

In Redeyef, a revolutionary stronghold in the Gafsa mining basin, 62% of graduates are unemployed. Here the masses gathered to celebrate January 5, the anniversary of the beginning of the 2008 (http://www.marxist.com/revolt-mining-area-gafsa-tunisia.htm) uprising which preceded the revolution. They are still in struggle, as they are in all the towns of the Gafsa phosphates mining area, where all economic life centres around the Gafsa Phosphates Company (CPG) and the Tunisian Chemical Group (GCT).

The commemoration took place in the headquarters of the UGTT trade union. One of its leaders, jailed in 2008, Adnen Hajji, delivered a fiery speech: “There is no question of abandoning a single one of our legitimate demands! The new government has no other choice, it must listen to us! People of Redeyef! You took the first step in this Tunisian revolution! It is time you reaped the fruits of those dry, harsh and sad years of suffering and poverty!” Those gathered answered his words with the rallying cry of “loyal, loyal to the blood of the martyrs!”

In Redeyef there are still remnants of the situation of dual power which arose during the revolution, when the local mayor fled the city and the workers themselves took over the running of all affairs. There is still no local mayor, but the people themselves organise all necessary public tasks.

In an attempt to try to appease the thousands of unemployed youth in the region, the two state enterprises in the region, CPG and GCT, have announced the creation of 3,000 new jobs. Over 17,000 applications were received. As the first results of the selection process were published, at the end of November, riots started in most of the towns in the mining basin. Nobody was pleased with the selection methods used. Applicants that should have been given preference (those with families, sons of retired miners, those with the required university qualifications) had not been admitted. For many, this was the same as under the old regime.

Hundreds of youth came out onto the streets in protest in Mdhilla and Moularès. They set up burning barricades, burnt down buses and cars and attacked the offices of the phosphates company as well as the police headquarters. The authorities declared a curfew between 7pm and 6am in all of the localities in the governorate of Gafsa.

The government was forced to suspend any further announcements of the recruitment process and promised to listen to the demands of the unemployed. A number of them started a sit-in protest.

Finally, on January 5th, three government ministers visited the region. However, they refused to meet the sit-in protestors. One of them, a 40 year old unemployed father of three, Ammar Gharsallah, who had been part of the sit-in for weeks, in desperation, doused himself with gasoline and set himself on fire. A few days later he died. Another three people, one woman and two men committed suicide in the same way the following week, in Djerba and Sfax. It is a clear indication of the desperation facing thousands in Tunisia, when one year after a revolution which was sparked off by an act of self-immolation, more are forced to take the same desperate action to draw attention to their plight.

The protest movement spread to agricultural workers who also joined the hunger strikers in Redeyef on January 9th. This is a significant development as it shows how other sections of society are instinctively attracted and come under the leadership of the organised labour movement, in this case the local UGTT branch which has a long standing revolutionary tradition. In an ever growing movement, miners joined the protest movement on the 12th with some of them also joining the ranks of the hunger strikers. Following the UGTT appeal for a general strike, the whole of Redeyef came to a standstill on January 17 in support of the demands of the movement. Primary and secondary school teachers and high school students joined this mass movement. (SEE PICTURE http://www.magharebia.com/cocoon/awi/images/2012/01/23/120123Feature4Photo1.jpg)

“Workers from all sectors in Redeyef have the same basic demands for reforms and government intervention,” said local trade union leader Adnen Hajji, adding that the protest was “the product of widespread frustration with the government’s neglect of the community’s pressing needs.” He threatened that if the demands of the Redeyef workers were not met they would “close down Gafsa Phosphate Company and may escalate the protest.”

These were not empty words. After a short truce in which they gave the government a chance to answer them, the strike movement resumed, affecting Redeyef, Om Larayes, Mdhilla and Kaff Eddour in the delegation of Metlaoui. The unemployed youth were at the forefront of this movement blocking trains carrying phosphate products and clashing with the police in Mdhilla. The Gafsa governorate building has been taken over by protestors and the governor has had to seek refuge in a nearby hotel.

Meanwhile, on January 13 another social explosion erupted in the mountain village of Makhtar, with a population of 12,000, in the governorate of Siliana. Faced with a desperate economic situation, with no jobs, no running water, no gas, no healthcare facilities, the people of Makhtar declared a general strike, which took on insurrectionary dimensions. With chopped down trees and tyres they blocked all access roads. “We are rebelling because it is, quite simply, intolerable,” said Ouided Slama, a young English teacher. The protest, which lasted for 6 days, before a truce was agreed with the national government, also spread to other villages in the region, such as Kesra and Sidi Bourouis, as well as Bouarada, where the local unemployed blocked the roads. In Makhtar, the Islamist Ennahda got about 40% of the vote in the Constituent Assembly elections. Their offices in Makhtar are shut, and nobody knows where their local representative is and nobody cares much either.

A similar uprising started in Sidi Makhlouf, with a population of 24,000, in the Medenine governorate in the South East, on January 23, when a general strike was declared. Once again, they demand economic development, jobs, healthcare facilities, etc. Negotiations with the regional governor were not successful and the people decided to take him hostage in the offices of the local delegation. In Jendouba, in the North West, unemployed youth also blocked the roads, as they did in Nezfa, in the neighbouring governorate of Beja. The British Gas installations in the Sfax governorate have also been blocked by local unemployed youth demanding jobs.

As well as these local and regional protest movements, which have in some cases acquired insurrectionary characteristics, the wave of strikes that has shaken the country ever since the overthrow of Ben Ali has continued and even intensified.

Refuse collectors in La Marsa, a coastal city near Tunis, a popular resort with the middle class, have entered the third week of their strike. The workers of the National Sanitation Office have also gone on strike in the regions of Tunis, Manouba, Ben Arous and Ariana. Workers at the National Civil Aviation and Airports Authority have started a 48-hour strike affecting the airports of Tunis-Carthage, Djerba-Zarzis and Tozeur-Nafta, protesting at the refusal of the company to hire subcontracted workers into the main workforce. Workers at the SITEP El Borma oil field also resumed their strike movement on January 23.

These are just some of the strikes which have taken place since the beginning of the year. This formidable wave of strikes which has lasted for a year reflects the newly found confidence of the workers after the revolutionary movement which led to the overthrow of the hated dictator. The workers feel strong and are on the offensive demanding the removal of the old managers, better wages and working conditions, the end to subcontracting, etc. This mood was partially reflected in the UGTT congress in December which elected a new leadership more in tune with the pressure from below, including a number of militants from the trade union left.

The elections to the Constituent Assembly and the installation of the new tripartite coalition government has done nothing to stop the strikes. As we explained in an earlier article (http://www.marxist.com/tunisian-constituent-assembly-elections.htm), the victory of right-wing Islamist Ennahda in those elections did not represent a shift to the right on the part of the masses which had carried out the revolution. It was more a case of a lack of a serious alternative to address the social and economic problems which affect the majority of Tunisians.

On December 23, the new president Monceuf Marzouki made a public appeal for the government to be granted a 6-month social truce. The speech was delivered at a meeting of the UTICA employers’ organisation and was aimed at reassuring them and foreign investors. But the workers are in no mood to wait. The Minister of Social Affairs warned that strikes and protests would only further worsen the economic situation and threatened to use “the full force of the law” against protestors. Already the police have been used to remove the sit-in at the British Gas installations in Sfax.

The government and the bourgeois media have started a propaganda campaign against strikes and protests, blaming strikers for all the problems of the economy and arguing that already 170 foreign companies have decided to close down their operations as a direct result of these movements. However, the same workers and youth who risked their lives and sacrificed dozens of martyrs in the struggle against the seemingly powerful regime of Ben Ali, are not going to be cowed by the threats of this weak government.

A trade union militant in Gafsa, Ammar Amrousia sums up the situation in this way: “Ben Ali might have fallen, but his system is still in place; and if things carry on in this way, there will be a second revolution.”

The whole situation which has developed in the last year in Tunisia is a confirmation of the position defended by the Marxists when the revolution erupted: the social and economic demands of the people cannot be separated from their democratic aspirations, and neither can they be met within the limits of capitalism.

Unfortunately, there was no-one at the time defending this perspective. It is time for the most advanced worker and youth revolutionary activists to draw the necessary conclusion. The only way to solve the pressing needs of the Tunisian masses is through the complete overthrow of the remains of the Ben Ali system, that is, the overthrow of capitalism itself.