The situation in both Pakistan and Nigeria are quite similar. They are both underdeveloped neo-colonial capitalist countries in crisis. This article is from a Pakistani Marxist, Lai Khan,and the experience which he document is quite similar to that in Nigeria. In Nigeria, there has been a qualitative raise in bloody sectarian violence.

The arson and burning down of 178 houses in the night of 8th and 9th March in Joseph Colony, a Christian neighbourhood near Badami Bagh, in the heart of Lahore is yet another fanatical incident that reflects the malaise afflicting the Pakistani society. A vigilante mob carried out this act of savagery on the pretext of allegedly blasphemous remarks made by a Christian youth in a drunken fracas with a Muslim friend.

Attacks on Christians and other religious minorities have become a regular feature in today’s Pakistan. The blasphemy and other draconian laws imposed by the vicious Zia dictatorship are not only used to settle personal scores but in most cases they are used for extortion of property and money. The Lahore arson attack is hardly any different if one goes by media reports. Behind the attack on Joseph Colony, say media reports, are land-grabbing mafias. 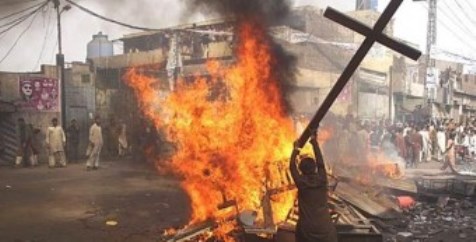 Religion has become a major enterprise and one of the most profitable businesses. Mosques, madrassas and other religious institutions such as shrines, have mushroomed in the last three decades. Many phony business deals are struck on the spaces allotted to mosque and madrassa networks.

The cost of building and running these networks is estimated in billions of rupees across the country. There is in fact a cutthroat competition between various religious sects to control mosques. This is one explanation for the burgeoning of sectarian formations. As the conflicts over control of religio- businesses enterprises become acute, there emerge more splits and  sects. Every new sect offers an even more draconian interpretation of the religion, fomenting further antagonism and hatreds.

Here is a typical pattern: a mosque, a madrassa or a shrine spring up almost overnight over a prime property location. Next, shops are built on the adjoining areas and are rented out at exorbitant prices. Religious inviolability masks the real sources of the funds used to build these institutions and cover their running costs. There is no auditing or accountability whatsoever. Apart from the drug cartels and other dubious sources, religious enterprises also draw petro-dollars.

In the 1960s and the 1970s, the US imperialism sponsored funded and nurtured Islamic fundamentalism through the CIA to crush the left and the workers’ movement that challenged capitalism and imperialist interests. Some religious sects are still being sponsored by western imperialism. But the major patrons now are Iran and Saudi Arabia. Not only the state agencies but also rich individuals from these countries invest in these sectarian outfits for their own vested interests.

US imperialism launched the dollar jihad through these fundamentalists in Afghanistan against the left-wing government of the Peoples Democratic Party of Afghanistan in the late 1970’s. These terrorists were trained and funded by the CIA through the Pakistani and Saudi intelligence agencies. The brutal dictatorship of General Zia ul Haq was supported by US imperialism. This despotic regime not only instigated the reactionary insurgency in Afghanistan but also used brute force in the name of religion to impose its tyrannical rule.

The Islamisation Zia enforced in the state and society affected large layers of the petit bourgeois. The bureaucratic caste in the state, especially in the middle layers, was indoctrinated with this venomous reaction. This mindset still prevails in sections of the judiciary, police, administration and the army. The decisions of the judiciary, actions of the police and the handling of such cases by the administration are biased and show clear religious prejudices against the religious minorities and different sects of Islam.

Although the Islamic parties have been politically weak with a limited social base, their hold on society is aided by their links to the different institutions of the state. These state agencies in exchange use these bigots to perpetuate violence and bloodshed both externally and domestically to further their own agendas. With the intensification of the crisis of the socio-economic system there is a rapid escalation of the bloody mayhem and chaos in society.

The reactionary mullahs of the various Islamic sects spew out venomous hatred from their pulpits. The shrill of the loudspeakers from these mosques makes life an agony for the sick and those who need to concentrate on their studies. They whip up their support by inciting this hatred on a sectarian and religious basis. The religious minorities who are generally from the oppressed classes are easy targets for these bigots. In several instances small businessmen and property dealers use these mullahs to issue fatwas and accuse those whom they want to extort. This process is going on at all levels of society. With the intensification of the economic crisis and vast misery that is worsening with the passage of time there is a widespread frustration amongst the masses. The primitive layers of society become fodder for the Islamic fanaticism. They become part of the mobs that carry out these pogroms against the Christians and other oppressed religious minorities, while the liberal and secular intelligentsia and politicians call for tolerance and secularism in society that is suffering and in decay.

In a country that was created in the name of religion to talk about a secular state and society is a contradiction in itself. But the real issue is that the Pakistani ruling class has failed to carry out the tasks of the bourgeois, or the national democratic, revolution including the task of separating religion from the state. Due to their historical belatedness and economic submission to imperialism they have failed to develop a modern industrialized society. As the crisis worsens, and there are growing challenges from the working classes to the reactionary elite and its state, this bourgeoisie and their state uses religion and Islamic fundamentalists to undermine the class struggle. These Islamic terrorists in return use this position to accumulate wealth and become part of the elite themselves. Like fascism, fundamentalist terror is the distilled essence of a rotting capitalism. It is a vicious cycle that has made the lives of the masses miserable and agonizing.

The rising pogroms and Islamic obscurantism poses the stark and harrowing threat of barbarism, especially with a temporary lull in the class struggle and the inertia of the mass movement. It is not only a danger to the minorities but the existence of civilization itself. This menace of religious neo fascism is intrinsically linked and enmeshed with the prevalent system in its terminal decay. The so called secular liberals and the nationalist bourgeoisie are economically, socially, technologically and financially so much debilitated and rotten that they cannot fight or eradicate this black reaction. Without the revolutionary overthrow of the system this tumor breeds upon the society cannot be salvaged.