As in all other European countries also in Austria the government is trying to make the workers and the youth pay for the capitalist crisis. Austria was severely affected by the crisis. In 2009 it was in deep recession with a sharp decrease in industrial production. And at the beginning of 2009 the government had to intervene with huge sums to prevent the collapse of the shaken bank system.

In spite of the huge bail out of the banks the problems didn’t end there. There was the constant threat of Eastern European governments being forced to default as their state budget deficits grew increasingly unmanageable. Austrian banks play a dominant role in the financial system of several countries in this region, and thus any default in Eastern Europe would immediately impact on the Austrian financial system.

As in most other EU states, Austria’s public debt reached new record levels and it was only a question of time before the government coalition of Social Democrats (SPÖ) and Conservatives (ÖVP) would start to “consolidate the budget“, as they call it. 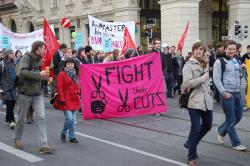 The federal constitution states that the government has to present its budget proposals to the parliament at the latest by the end of October of each year. As important regional elections (especially in Vienna) were being held in September and October, the coalition partners were afraid that a public outcry against the cuts would make them lose even more votes than one would expect under normal conditions. That explains why the government put off the whole parliamentary process and debate of the budget until December.

However, as one could have expected, after the regional elections more and more details of the budget proposals were coming to the surface. When the government finally presented their draft budget it soon become clear who was going to be forced to pay for the crisis.

The SPÖ-led government under Chancellor Werner Faymann tried to present the draft as a good example of “balanced soacial fairness” because all groups in society would have to contribute to the consolidation of the budget. His aim was to solve the crisis based on so-called “justice and fairness”. The bourgeois media put all its efforts into backing this point of view. Also the leader of the ÖGB (the Austrian trade union confederation) added his backing to this propaganda campaign, stating that he was “happy that many demands of the trade unions have been considered in this draft budget“. Unfortunately, the truth is very different.

In particular, the severe cuts to family assistance benefits for children, for the young unemployed and for university students older than 24 years have provoked spontaneous protests especially by the students. One day after the draft budget was made public, on a Sunday, there was a live discussion on TV with representatives from all parties which started at 10pm. In front of the building where the discussion was taking place some 5000 students had gathered to show their opposition. They even managed to cut off the power supply and for several minutes the broadcast went off the air. Some days later 15,000 students in Vienna and several thousand students in other university towns took part in demonstrations against these cuts.

It is not only that the government plans to cut these assistance payments, but is also introducing a general “reform” of the university system which would mean an end to free access to universities. They want to introduce an “entry period” where students would be selected. According to the plans of the Minister of Finance, Josef Pröll (ÖVP), the majority of the students should only be allowed to sit for a bachelor degree, with a Master’s being reserved for a small, hand selected elite of students.

These spontaneous student protests changed the whole public debate overnight. Inside all the parties critics starting raising their voices demanding changes in the draft, especially concerning the cuts affecting family benefits. The conservative ÖVP, which always presents itself as the “family party”, faced opposition within its own ranks. Of enormous importance was the fact that within the trade unions the president of the ÖGB was forced to change his position and criticise openly the draft budget. It has been reported that he came under severe pressure at the national executive of the Faction of Social-Democratic Trade Unionists which made him change his first statement.

Apart from the already mentioned cuts that directly affect families, there are also cuts in the system of care allowances leaving 10,000 people without any financial support, an increase in the age of retirement, especially for women, less state aid for the health insurance system, and cuts for the schools, putting an end to all the progressive reforms of the Social Democratic Minister of Education.

Back in spring the SPÖ forced the ÖVP to accept that 40 percent of the budget consolidation should come from new or higher taxes and not from cuts in the welfare system. The intention of the SPÖ leadership was to show the rank and file and the trade union wing of the party that the Social Democracy is not prepared to accept 100% the programme of the Conservatives.

Back then the Marxists of Der Funke in the SPÖ warned that this whole campaign of so-called “time for justice” or “time for fairness” was a reflection of the fact that pressure from below has been building up and that the party leadership has had to react, giving expression to at least some of the demands of the rank and file but, at the same time, by simply calling for a “fair” distribution of the burden of consolidating the budget they were preparing a smokescreen to confuse the rank and file in the branches and in the unions.

We now see that the biggest share of the tax increases once again is being imposed on the masses. There will be an increase in the tax on fuel and cigarettes which is clearly going to hit the masses. Then there is the so called “bank tax” which is supposed to raise some 500 billion euro. The government has presented this as the most important measure that will make those who have caused the crisis pay for it. However, the banks have already announced that this will lead to higher bank charges. So once again the masses will be made to pay. In fact that Federation of Industrialists is very happy with these tax plans because they have been able to defend most of their tax privileges.

The university students reacted spontaneously against these attacks and showed that they were prepared to fight back. The most important problem we see is once again the lack of leadership. Last year we saw a very impressive movement organised from below against the worsening conditions in the universities. However, that movement was not able to give itself a structure and a programme which caused frustration among many activists. This layer is now proving incapable of giving the mass of students a perspective. For one night several hundred students occupied – again – the biggest lecture hall in Vienna. But instead of organising a political debate on how to proceed, the supporters of “grassroots democracy” preferred to hold a party! Thanks to all this, the initiative is now back in the hands of ÖH, the official student union, which has no interest in any self-organised protests culminating in occupations and a university strike. What it did was to call for a big demonstration on Saturday, November 27 against the cuts in family assistance benefits.

The Marxists intervened in the demonstrations with a leaflet explaining that we have to learn the lessons of the movement of last year; hat we need a clear programme, i.e. to fight against any cuts and the whole draft budget and for sufficient public funding for the universities and for free access to university. Moreover the students have to elect a leadership based on democratic discussions on programme and strategy. And the student movement has to actively seek allies outside the universities especially in the trade unions.

Also in the schools there are several attempts to organise a broad movement. On November 19 there will be a student strike in Vienna and Wels, and on November 23 the students in Vorarlberg will come out on strike. Unfortunately the Young Socialists (Sozialistische Jugend, or SJ) leadership so far has refused to support this call, so it will be the case of the left wing within the SJ and some other left-wing organisations organising these strikes. The Der Funke supporters are doing their best to build the movement in the schools.

However, the SJ has a decisive role in mobilising for the big demonstration on November 27. Probably the SJ will have the biggest bloc with several hundred youth and a sea of red banners. Der Funke will support this mobilisation with all its forces. We have to make this demonstration a big success to show the strength of our movement. It will also be decisive to extend the movement beyond the students. In the last two weeks two major unions have held their congresses. In both congresses the delegates voted for resolutions criticising the draft budget, but the union leadership is still hoping to convince the government to come up with a “just and fair budget”. They referred to the demonstration on November 27 at the congresses but so far they have not openly mobilised for it, justifying this by saying that it is task of the youth wing of the unions to mobilise. Nevertheless many workers and trade unionists will participate in this demonstration.

A decisive battle will also develop within the SPÖ. The party congress in July voted for a programme of taxing the rich. In the draft budget most of this programme has been dropped by the party leadership for the sake of staying in a coalition with the Conservatives. The SJ opposes this change of course as do the trade unions. In one district in Upper Austria the party congress voted against the cuts and called for an end to the government coalition. The SPÖ left is calling for a campaign to put pressure on the parliamentary faction of the SP to vote against this budget of cuts and big taxes. Massive demonstrations and student protests could have an effect on the mood within the SPÖ, forcing those sectors of the leadership, which lean more on the unions and arguing more for a left-wing programme, to refuse support for Faymann and the government.

The Marxists are explaining that the question of the leadership of the mass organisations of the labour movement is the decisive factor in this situation.