There is no future without the past. An empirical, mechanistic and a pragmatic approach to the revolution sweeping across the region from the Atlantic Ocean to the Arabian Sea would end up in a flawed analysis and a disastrous fate for the mass upheaval.

Only from a historical perspective, linking the past and the future with the events unfolding today, can one give a complete picture of the situation and outline the needs and the prospects of the revolutionary movement.

The role of imperialism being portrayed by the media is not only false but is a blatant deception to confuse the masses. There is nothing new about the imperialist aggression in Libya. Its is the same old story of a villainous autocratic ruler, who is rather erratic and hinges on insanity, brutally trying to drench an uprising in blood and rules over some of the largest sulfur free oil reservoirs in the world. The bourgeois media is baying for the blood of this callous dictator who just months ago was delivering pious sermons to the leaders of the G8 countries who listened diligently. 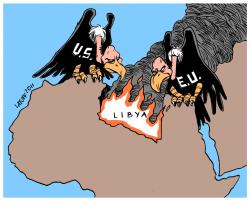 If we look into the not too distant past, the same narrative was being expressed in relation to Noriega in Panama, Saddam Hussein in Iraq and several other military and civilian stooges of imperialism across the neo-colonial world who got on the “wrong side of history”.

However, the main subterfuge behind imperialist “intervention” is their rather “deep concern” for democracy, freedom and human rights. This motive has been the main ploy in the wars and invasions killing millions in the last century by imperialist aggression. On August 6, 1945 President Harry Truman ordered the U.S. Air force to drop an atom bomb on Hiroshima. Three days later they dropped a second bomb on Nagasaki. They did this despite the fact that these were cities full of civilian and that were of no military value and the Japanese were already defeated and suing for peace.

The arrogance of American power was put into words by the managing director of the New York Times, Neil McNeil, who wrote that both the United States and the world needed peace based on American principles – a Pax Americana. The earlier version of this was the Monroe doctrine of 1823 which was devised to subjugate the whole of the Latin American continent.

In the 1960s high explosives, napalm and cluster bombs rained down on Vietnam. The U.S. air force dropped toxic chemicals, including the notorious Agent Orange on forests, allegedly to kill the vegetation and deny shelter to the guerillas. A total of 18 million tons of herbicide were dropped. In all, the U.S. dropped more tons of explosives on Vietnam than were dropped by all sides in the Second World War.

The more recent rewards of democracy and human rights were reaped by the people of Iraq who had to sacrifice at the alter of the imperialist ‘Kali’ more than a million children to attain these gems doled out by the bosses of the planet. The genocide in Afghanistan and Pakistan with daisy cutters, cluster bombs and drone attacks are the price of achieving “democracy” of the rich for the rich by the rich.

However, the present aggression in Libya shows a certain exhaustion of the bestial military might of U.S. imperialism. Apart from the economic catastrophe that has hit them, they are hindered by their failures in Iraq and by the quagmire that has become Afghanistan. That explains why they want the Europeans to lead the assault.

Sarkozy and Cameron, with plummeting popularity ratings at home, are trying to play heroes and villains in Libya. They want to portray themselves as being “on the right side of history” and with the added bonus of getting easy access to the large oil reserves and revenues moving into the London and Paris stock exchanges.

This won’t help them much to water down the rage of the French and British youth and workers who have been inspired and emboldened by the Arab revolution. This rhetoric of “saving the people of Benghazi” is very devious to say the least. Given that Gaddafi’s ramshackle forces had proved unable to crush the rebels in Misrata and Ajdabiya, an armed and hostile city of more than 700,000 inhabitants was a far cry for Gaddafi’s mercenaries to capture Benghazi.

However, the imperialist aggression will not and cannot proceed as proclaimed. Stratfor, the think-tank of mainly ex-CIA staffers, wrote in its recent analysis, “The test will come if a war designed to stop human suffering begins to inflict human suffering”. Regime change has already displaced the stated mission. Bombing from the air or the sea cannot achieve any of the desired results. It will have to be “boots on the ground”. Even the Pentagon is terrified of such a prospect. Mission failure is a serious possibility.

As the imperialist stooges fell in Tunisia and Egypt the masters distanced themselves. But now the most formidable despots are trembling in their shoes. And here come the double standards about human rights and the farce of bourgeois democracy. Why the refusal to impose no-fly zones on Bahrain, Oman and Yemen? U.S. “military advisers” are actively taking part in the repression being carried out by the Yemeni autocrat. But the army is splitting and the Saudis are trying to develop another despot General Mohsen as a replacement.

The core country is Saudi Arabia, the largest producer of oil in the world. This dynastic despotism has been shaken and is making desperate attempts to stave off the revolt that is simmering just beneath the surface.

Here there is an astonishing unanimity between U.S. imperialism and Islamic fundamentalism. The religious right in Pakistan is so elusive about the tyranny and brutality of their sacred Al Saud regime that they consider it a sin to speak against this gang of former desert pirates.

However, the oppressed in Saudi Arabia will more than speak. They have suffered the harrowing repression at the hands of this pious elite. It is now a matter of life and death for these workers faced with drudgery in the scorching heat of the Arabian Desert. Imperialism, gripped by economic crisis and political decay, is acting like a wounded beast. The intervention in Libya is aimed at cutting across the revolutionary tide of the Arab Revolution. The Arab masses will only win by overthrowing the system against which they rose, i.e. capitalism, and smashing all obstacles.