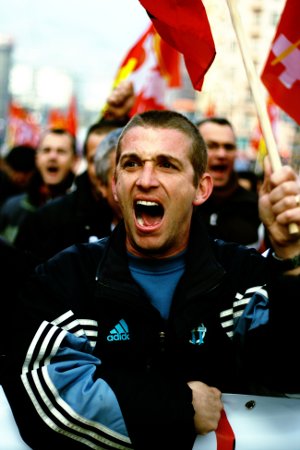 Those working people who were fooled by this propaganda were soon to discover their mistake. The policies of Sarkozy and the employers’ syndicate (MEDEF) amount to a systematic defence of the rich and powerful. The rights and living conditions of the working people have suffered a whole series of vicious attacks. From “reform” to “reform” – in reality counter-reforms – the capitalists and their government agents are bent on the destruction of all the past gains of the workers’ movement, in relation to pensions, wages, welfare benefits, public services and trade union rights. The Sarkozy administration represents the most reactionary government ever seen in France since the Vichy regime during the Second World War.

Time and time again over recent years, workers in the various branches of the economy and public services have moved into action in an attempt to resist these attacks. However, the leading bodies of the trade unions confederations resisted joint action, insisting that the struggle be conducted “dossier by dossier”. One of the most right-wing trade union leaders, François Chérèque (CFDT), clearly considers himself as an unofficial advisor to the government, and warned Sarkozy on many occasions that if he “opened too many fronts at once”, it would be difficult to prevent the separate struggles from merging into a generalised movement. Chérèque, like the other union leaders, limited their demands to that of being “consulted” in relation to the application of the counter-reforms! For instance, at the beginning of the railway workers’ strike to defend their pension scheme, the CGT leadership called for a return to work on the basis that the government now agreed to consultations. The consultations took place, and the pension scheme was lost.

This “partnership” policy between the government and the unions has led from defeat to defeat. But at the same time, it led to growing pressure for concerted, united strike action and demonstrations against the government. With the onset of the recession, the union leaders had no choice but to concede to rank-and-file pressure on this question. The January 29 mobilisation was a huge success. Anything up to 300,000 workers marched in Paris on that day. Nationally, the overall figure was around 2.5 million.

In that same month, unemployment rose by 90,000, after rising by 50,000 in December, even according to the notoriously understated official statistics. Even before the onset of the recession, 7 million people in France were living below the poverty line. Industrial production and investment is collapsing. Factories are closing, tens of thousands of workers are being sacked every week. Companies move abroad in search of cheap labour. The MEDEF president, Laurence Parisot, has stated that capitalists have “absolutely no responsibility whatsoever” for the present crisis, and claims that the best way to save jobs is to “facilitate redundancy procedures”. This kind of cynical and reactionary arrogance is a provocation to workers throughout the country. 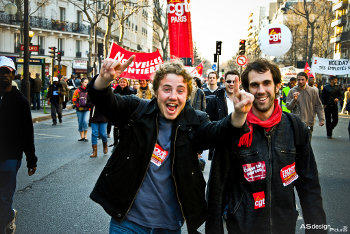 The union leaders – including the CGT leader Bernard Thibault – offer no credible perspective to the struggle, and do not put forward a serious platform of demands. After the 29, Thibault said that workers should wait to hear what Sarkozy would say, and reiterated his demand for “consultations”. Sarkozy simply announced further counter-reforms, abolishing certain forms of taxation on employers, and then invited the unions for discussions on February 18. Thibault and the other union leaders accepted this invitation, and announced another “day of action” for March 19. The consultations gave no result, and the government stated that no concessions would be made, irrespective of how many millions of people demonstrated on the day.

The general strike in Guadeloupe and Martinique showed how a serious struggle should be conducted. The local economy was paralysed by a solid strike which at times took on an almost insurrectionary character. Here, it was not a question of gentlemanly consultations in palatial surroundings about anti-working class measures, but of an energetic struggle for a major increase (200 euros) in wages for the lowest paid workers. This magnificent struggle ended in victory, and the lessons of this have had an effect on the thinking of workers and youth in metropolitan France.

The gap between the expectations and willingness to struggle of the workers and the complacent “moderation” of the trade union leadership is becoming more and more evident as time goes on. In the period leading up to March 19, La Riposte – the journal of the Marxist wing of the French Communist Party – expressed the mood of the most class-conscious layers of the communist and trade union movement in the following way:

“To put pressure on the government ‘consultations’, a new day of action has been planned for March 19. And what will be the consequence of this? At best, another television appearance of the President, in which he will say that he understands the concerns of the workers, but that his policy will not change. And what will we do after that? Another day of action? This method will lead to nothing, apart from the exhaustion of the most combative layers of the trade union movement, and convincing many other workers that the unions have no serious strategy to defend them. From the government point of view, it is of the utmost importance to maintain the fiction of ‘consultation’ with the unions. The government is sitting on a volcano. It knows that if talks are broken off between the unions and itself, a movement similar to that which broke out in the Caribbean will soon be on the order of the day in France.

“Marchers, however numerous, shaking fists below the windows of the capitalists from time to time will not force them to make concessions. They must be taken by the throat. That means, concretely, the organisation of mass strikes of an unlimited character, particularly in the key sectors of the economy.

“In any event, if the trade union leaders do not change course, if they persist in their ‘consultation’ strategy, then sooner or later, a movement will take place from below, on the basis of militant demands on the question of wages, jobs and public services. What happened in the Caribbean will happen here in France. In the course of its development, such a movement would pose the question, as an immediate and practical task, of the ownership of the factories and of the economy in general. Under such conditions, the programme of La Riposte, for the nationalisation of the banks, of industry and of commerce, under the democratic control and management of the workers, will merge with the ideas and aspirations of a significant part of the working class.” (Stratégie syndicale: 29 janvier, 19 mars... et après? March 12th 2009, La Riposte).