This was the pointed question posed in a recent article on the website of Forbes, the proud and unapologetic mouthpiece of capitalism. In the words of the article’s author, Igor Greenwald: “Capitalism has been the dominant economic system in the Western world for, give or take, 400 years. And in that virtual eye blink in the grander scheme of things it has produced more wealth than all the prior economic systems put together ... But nothing—not even the bestest thing ever—lasts forever. Stuff happens. Things change. Systems work until they don’t. How close is capitalism to the end of its useful life? What comes next?”

He continues: “In 14th century Europe, the bubonic plague temporarily boosted wages and reduced agricultural rents. Barring a similar game-changer, it’s hard to be optimistic about the spending power of workers who double as consumers ... If a zero-sum, winner-take-all struggle for leverage is the name of the game, those games seldom conclude as the winners might hope.” [our emphasis]

In other words, unless there is another “game changer” like the “Black Death—which “boosted wages” by wiping out 75–200 million people worldwide, including an estimated 30–60% of Europe’s population—workers can’t expect things to get better under this system! Leaving the cynicism of this comment to one side, the very fact that the question of capitalism’s viability is being presented in this way in a publication like  Forbes indicates that even some of its most ardent defenders are having some second thoughts. 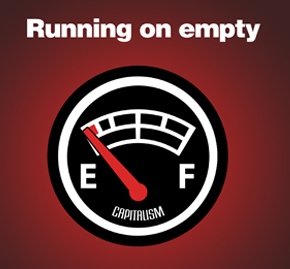 The grinding crisis of the last few years has brought to the surface the inherent contradictions of the system, and shaken up the consciousness of millions at every level of society. Throughout the 1800s, when the system was still playing a historically progressive role in developing the productive forces, this kind of pessimism was simply not seen among capitalism’s advocates. On the contrary. The capitalist class was full of confidence for the future, with grand plans to rule the planet for centuries to come. Nor was it being asked by its defenders in the 1950s and 60s, during the prolonged postwar boom, when the overall curve of economic development trended upward. But things are different now.

It is also significant that the Forbes article acknowledges that capitalism is a specific and relatively recent form of human socio-economic organization. We are usually led to believe that capitalism is “the best of all possible worlds,” that it has “always been, and always will be.” In reality, capitalism is a historically developed system, which superseded various systems that preceded it. The logic, of course, is that it too will one day be superseded—although the author does not conclude this.

Forbes is not the only serious news and information outlet concerned with the system’s structural problems. The geopolitical strategic analysts at Stratfor had this to say in a recent article by their founder, George Friedman: “...The United States faces a potentially significant but longer-term geopolitical problem deriving from economic trends. The threat to the United States is the persistent decline in the middle class’ standard of living, a problem that is reshaping the social order that has been in place since World War II and that, if it continues, poses a threat to American power.

“The United States was built on the assumption that a rising tide lifts all ships. That has not been the case for the past generation, and there is no indication that this socio-economic reality will change any time soon. That means that a core assumption is at risk. The problem is that social stability has been built around this assumption ... the social fabric of the United States is at risk, and with it the massive global power the United States has accumulated. Other superpowers such as Britain or Rome did not have the idea of a perpetually improving condition of the middle class as a core value. The United States does. If it loses that, it loses one of the pillars of its geopolitical power.” [our emphasis]

Just what is the “socio-economic reality” for the majority in the U.S. today? The percentage of working-age Americans with a job has been below 59% for 39 months in a row. It has remained virtually unchanged at 58.7% since the low-point trough of the economic cycle back in September 2009. That’s roughly 100 million working-age Americans without a job. 48% of Americans are living in poverty or are “low income.” 77% of Americans say they are living “from paycheck to paycheck.” 60% of the jobs lost during the last period were considered “mid-wage” jobs, while 58% of the jobs created over the same period have been “low wage.” According to the Center for Economic and Policy Research, only 24.6% of all American jobs qualified as “good jobs” in 2010.

Median income has fallen for 4 consecutive years, by roughly $1,000 per family per year. For those at the bottom of the income scale, and especially for young people, things are even worse. 57% of all U.S. children are living in “low income” or outright impoverished homes. Families with a head of household 30 years old or younger have a poverty rate of 37%. More than one million public school students in the U.S. are homeless. According to Bloomberg, since 1978, tuition and fees for college have risen by more than 1,000%, medical expenses by 601%, and food prices by 244%. 53% of those 25 years or younger with bachelor degrees were either unemployed or underemployed last year. An estimated 25 million adults are living with their parents.

40% of Americans have less than $500 in savings. 28% have a grand total $0.00 set aside in the bank for emergencies. 20.2 million Americans spend more than half of their income on housing, a 46% rise since 2001. Electricity bills have risen faster than inflation for 5 years running, and water bills have tripled over the last 12 years. 47.7 million Americans depend on food stamps, a 50% rise from just 4 years ago. That’s one of every 6.5 Americans, as compared to one of every 50 in the 1970s. This is roughly equal to the combined populations of half the U.S. states plus the District of Columbia.

In other words, as we have explained many times in the pages of Socialist Appeal, the material basis for the American Dream is dead, and this betrayal of expectations will have profound consequences on workers’ and young people’s consciousness.

So when Friedman refers to the “middle class,” he is really talking about wide swathes of the working class—the vast majority of the population. When Mr. Friedman hints at the growing risks to social stability, and Mr. Greenwald ominously notes that “those games seldom conclude as the winners might hope,” they are referring to the prospects for mass social upheavals and in the final analysis—revolution. Everything has its limits and eventually reaches a “breaking point.”

The recent rotten-egg-of-a-deal on the debt and “fiscal cliff” will only add to the immiseration and intensify the contradictions. The automatic cuts have only been postponed for a few weeks, so we will be treated to another farcical “showdown” between those who want cuts now and those who want cuts gradually. One way or another, billions of dollars in painful cuts are coming. Social Security, Medicare, Medicaid and more remain on the chopping block.

Barely mentioned during the media storm over December’s debt ceiling negotiations was the fact that the Social Security “paycheck tax holiday” was allowed to expire, which means less weekly take-home pay for 163 million workers. This is a regressive tax that hits those least able to afford it the hardest. Meanwhile, the rich and their corporations are being allowed to continue squirreling away their money virtually undisturbed. The idea that the wealthy’s riches will somehow “trickle down” has been thoroughly discredited by the reality of the last 30 years.

Corporate profits as a percentage of GDP are at an all-time high, while wages as a percentage of GDP are near the all-time low. It has been estimated that between subsidies, corporate tax underpayments and deductions, offshore tax havens, and various corporate tax loopholes, the wealthiest Americans avoid as much as $3 trillion in taxes every year. This is 3 times the U.S. annual budget deficit.

Never mind the trillions in cash the so-called “job creators” and “captains of industry” have parked unproductively in bank accounts, while millions of able and willing workers languish in unemployment. The top 1% have as much wealth as the bottom 95%. The richest 400 families in the U.S. have as much wealth as the bottom 50% of the population. The six individual Wal-Mart heirs alone are “worth” more than the bottom 30% of Americans  combined. The poorest 50% own just 2.5% of the country’s wealth.

We say: make the bosses pay for their crisis, not the workers and the poor! If the capitalists can’t run society in the interests of everyone, the workers certainly can!

The American working class can and must fight back. More importantly, it can and must fight to win. The imposition of “Right to Work” in Indiana and Michigan are a warning to the labor movement of what’s to come if the unions do not adopt class struggle tactics that recognize the opposed interests of the workers and the bosses. The failure of the labor leadership to give a real lead in the fight against Right to Work and on the political front over the past few decades led us to this situation. However, the 8-day strike at the Port of Los Angeles, the “Black Friday” Wal-Mart protests, and the walkout by hundreds of NYC fast-food workers indicate that more and more workers will not simply lay down and take continued abuse. More fight backs are sure to erupt in the months and years ahead.

So what is the way forward? Mr. Friedman declines to provide an answer and says simply, “People who are smarter and luckier than I am will have to craft the solution.” As he sees the world through geopolitical eyes and not from a class perspective, he is unable to conceive of a way forward, despite his many insights. As for Mr. Greenwald, his solution is predictable: he wants to save capitalism from itself. But he fails to understand that attempting to regulate capitalism is like trying to “regulate” the eruptions of a super-volcano!

Our answer to Forbes’ question is clear: the capitalist system is indeed dying. If it is not replaced by socialism, it threatens to take the whole of society back into an age darker than humanity has seen in a thousand years. We would also add that it will not breathe its last gasp of its own accord; it will require the conscious and organized efforts of the united working class to give it a final push over the cliff of history.

Although many on the left are pessimistic about the future, we Marxists are optimistic. By keeping the big picture in mind, we understand that the perspective for humanity is bright, despite the capitalist horrors that take place every day.

Under capitalism, humanity has developed the means of production and technology to previously unimaginable heights. However, the right of any socio-economic system to continue to exist depends on its ability to develop the productive forces and consistently increase the standard of living of the majority. Capitalism can no longer achieve this. Its best days are behind it and there are only bad days ahead.

Only socialism can give humanity a new lease on life. Once society’s vast untapped potential is unleashed from the shackles of the profit motive, we will see an unprecedented flowering of culture, art, and science, and a dramatic increase in the quality of life of every inhabitant of this planet. That’s a future worth fighting for.