On Saturday, October 16, more than 3 million people took the streets of France in hundreds of demonstrations in cities and towns throughout the country in the latest national day of action against the proposed counter-reform of the pensions system. The number was on a similar scale as October 2, the last time the trade unions called a day of action on a Saturday but the movement has certainly developed further. The demonstrations were another show of strength of this movement which has lasted for months and seen 5 national days of action since the end of the summer holidays.

This is a crucial week for the movement, as the “reform” of the pensions system will go through its last stages of parliamentary discussion on Wednesday. The trade unions have called for yet another national day of action with demonstrations and strikes on Tuesday.

The movement however, has moved from repeated demonstrations to open-ended strikes (grève reconductible, all out strikes whose continuation is voted in mass meetings every morning) in different sectors of the economy, particularly in the railways and oil refineries. Last week saw the entry into the movement of the student youth, mainly school students but also at universities. Hundreds of schools have been blockaded, up to 1000 on Friday according to school student organisations UNL and FIDL, and tens of thousands of students have joined workers at demonstrations but also at picket lines and blockades. 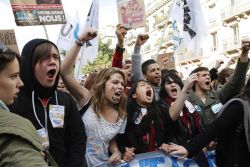 The movement has gained massive and increasing public support. All opinion polls show that not only an overwhelming majority of the French people oppose the “reform” proposed by the right wing government of Sarkozy, but also there is strong support for the strikes and blockades. According to one opinion poll issued by Canal Plus on October 14, 54% of the population are in favour of “the unions organising a general strike like in 1995” if the government refuses to withdraw its pensions “reform”. Figures are even higher amongst the youth (68% for), public sector workers (71%) and manual workers (70%). The movement in 1995 was not strictly speaking a general strike, since it was mainly limited to the public sector, but it involved 5 weeks of paralysis of the railways and widespread public sector strikes.

Another opinion poll by polling company CSA shows that 71% support the national day of action on October 19, including 89% of public sector workers and 76% of private sector workers. These figures have been steadily increasing since the beginning of the movement, but particularly since September, when 62% expressed their support.

The government has attempted to give the idea that the movement is losing strength and has deliberately falsified the figures of demonstrators. Police unions have actually accused the government of making up the figures it gives about attendance to demonstrations before these take place. The truth is, the government is isolated on this issue and has clearly lost the battle for public opinion.

The government has also attempted to use repression, mainly against the school students, but also against trade unionists blockading oil refineries and depots. Already a 16-year old student lost an eye after being shot at with a plastic bullet and another one was severely injured by the impact of a tear gas cannister. Repression is a dangerous tool to use, as it can have the effect of escalating the movement rather than stopping it.

However, this “reform” is seen as crucial for the ruling class in France. Under current legislation, French workers can choose to retire at 60 if they have accumulated 41 years of social security contributions and can draw a full state pension at 65. The right wing Sarkozy government wants to increase the minimum retirement age to 62 with 42 years of social security payments, and the pension age to 67. The economic crisis of the last two years has increased the state debt to 80% of GDP and the ruling class wants to make the workers pay for it. After handing out billions of euro to the banks now the state hopes to “save” 70 billion euro with this attack on pension rights.

For Sarkozy himself, the future of the proposal is closely linked to his own political future. His rivals in the ruling right wing coalition are sharpening their knives. De Villepin, who already lost his job after his Contract of First Employment plan (CPE) in 2006 was defeated on the streets, has called for the government to make a compromise, suggesting it could retain the retirement age at 65. For Sarkozy the problem is that if he makes a concession to the trade unions (even of going back to the negotiating table), this could mean the end of his political career.

Massive opposition to the project in opinion polls and massive demonstrations, in and of themselves, will not necessarily prevent the passing of the “reform” on Wednesday, October 19th. This is something that millions of workers and youth seem to have understood. After so many days of action, and with the trade union leaders not wanting to say the dreaded words general strike, the movement is developing its own dynamics from below.

There is a growing consciousness that this is a crucial tour de force between workers and capitalists, that only by paralysing the economy with blockades and a national open-ended strike can the movement stop the government's plans. A number of sectors are already involved in open-ended strikes but now, for the first time, general assemblies representing workplaces and unions in the public and private sector have voted for department-wide indefinite strikes. 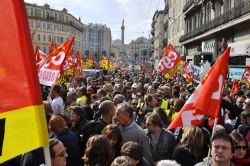 The first one was the department of the Ardennes, on Sunday, October 17, when an inter-professional general assembly, organised by all unions present in the movement, voted unanimously for “an open-ended strike in all sectors (public and private) starting on Monday”. The shop stewards and elected representatives present at the rally (picture at website of L'Union), “representing the main workplaces in the public and private sector in the Department were aware of living an historic moment”, wrote the local paper.

The announcement was followed by another appeal for a Departmental open-ended strike in Haute-Loire, also signed by all unions. The leaflet issued by the trade union coordinating committee reports that several workplaces have already decided to join in: “Michelin, Recticel, public and private health care, education, SNCF railways, regional administration, EDF GDF (gas), Ministry of Finances, Tanneries, Vériplast, Préciturn, Fromagerie du Velay et de Beauzac” amongst others. “The strike costs us dear” continues the leaflet, “but we are defending two years of our lives, it is worth it”.

Another sector which has announced its participation in the movement is that of the lorry drivers, which have a tradition of having blockaded the country before on several occasions. The CFDT and CGT unions in this sector have announced that “actions will take place throughout the hexagon from Monday”. From early in the morning, lorry drivers have begun organising go-slows outside industrial centres, intermittent road blockades in the main motorways, etc. Interestingly, workers in the armoured vans transporting money (which play a vital role in many parts of the economy) have announced that they will also come out on strike.

Oil refineries have been on strike for a week already and there are signs of fuel supply problems affecting both industries and car users. As of Monday 18th, 1,500 petrol stations were affected, having run out of one or several products. Despite government assurances, panic buying had already started in many parts of the country. To the oil refinery strikes we must add the three-week-long strike at the country's largest oil port in Marseilles against outsourcing of the work force, which has prevented supplies from coming in. Workers at one of the country's nuclear power stations at Flamanville (Manche), have voted today 175 in favour of a 48h strike out of 180 present at a workplace meeting.

Marseilles has become one of the most radical points of the movement, with a massive demonstration on October 12 of 230,000. The French paper Liberation described the mood in France's second largest city:

“Marseille is like a big pot where the social broth is maintained in permanently simmering stage. Just a few additional degrees of outrage would blow the lid. That's what happened Tuesday (October 12), with the demonstration in the city centre and the call for renewed strike launched by most unions.”

Railway workers unions, also on strike since October 12, have launched an appeal to strengthen the movement in order to completely paralyse railway transportation. The idea in the minds of thousands of activists is clear: “we need to paralyse the country if we want to stop this attack”. Workers are increasingly realising the role they play in a capitalist economy: without their permission nothing moves. 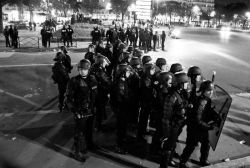 The only slogan which is adequate to the situation is that of an open-ended general strike involving public and private sector workers until the withdrawal of the pensions plan. The trade union leaders, are not clearly issuing that appeal, but at local and regional level workers are already moving in that direction. The leaders of the CGT bear a particular responsibility in this as people already assume that the leaders of the other unions are not necessarily going to organise radical action, but they expect the CGT to offer some sort of leadership. As the final passage of the “reform” in parliament on October 20 approaches, the pressure is building up. The Nord Pas-de-Calais CGT has launched an appeal for a permanent picket outside parliament to prevent the approval of the attacks.

A victory for the French workers would have a massive impact throughout Europe encouraging workers to go on the offensive against the attempts of the capitalists to make the workers' pay for the crisis with cuts in public spending and attacks on pension rights. Already on Saturday 16 we saw the massive mobilisation of at least half a million workers in Rome, called by the FIOM metal workers union, in defence of workers rights. At the end of the demonstration, CGIL leader Epifani was forced by the mood in the square to speak of calling a general strike. A general strike has been called in Portugal for November 24. In Romania, civil servants have engaged in wild cat walk outs against the massive austerity plans of the government. A victory in France would send a clear message: struggle pays off and general strikes can defeat the austerity plans of the governments.

The stakes are very high and this will be a crucial week.