Nigeria presently generates less than 3000 MW of electricity despite the promise of 6000 MW since 2009. This is highly ridiculous for a country that has the second fastest growing Liquefied Natural gas (LNG) capacity in the world (second only to Qatar). The question of how much energy do we need in Nigeria with a population of over 140 million is never emphasized. To answer the question one needs to compare our per capita production of electrical energy with other nation like USA and South Africa. USA is producing almost 570 billion KWH and South Africa is producing 200 billion as at 2001. If Nigeria were to produce electricity at the USA rate of 12.7 billion KWH per million people, then with a population of 140 million people, we should be generating 174,000 MW of electricity. This situation has led to many companies closing shop because of high cost of running generators. It was estimated that the cost of running private generators in Nigeria a years is $13 bn. This situation has also worsened the unemployment situation in the country as more workers are being laid off. Many Nigerians have lost their live as a result of inhalation of fumes from power generator; this is obviously an avoidable death, if we had a Government that truly has the interest of the citizen at heart. 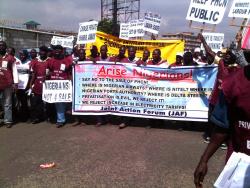 One of the major reasons for the poor state of Nigeria's power sector is that there is no enough gas available to run gas-powered plants. The gas that is supposed to run these power stations is being exported. Nigerian Ruling Class places profit-making above other considerations. This commodity must be purchased at economic rate. This means that Power Holding Company of Nigeria (PHCN) must sell electricity at economic rates in order to recoup investment. Another problem is Nigeria's poor transmission and distribution networks. Transmission lines are poorly maintained resulting in transmission losses of over 25% of electricity produced. All the Power Generating plants in Nigeria are old and are working below the installed capacity with some not operating at all. In 2004, the government implemented the National Integrated Power Project (NIPP) with a goal of building new generating plants, numerous transmission and distribution projects as well as gas pipelines and other related infrastructure. These projects have never and can never see the light of the day.

It has been stated that Capitalism if not overthrown will always find solution to its problems, but the question is, at what cost do they get these solutions; at the cost of inflicting more suffering on ordinary people. This is perfect in describing the present Nigerian situation. Instead of looking at how to reduce or even cancel gas exportation in order to make enough gas available to generate the required electricity for the country and how to make all the power generating stations functional and also build more station. The only solution Nigerian capitalist class can think of is to sell its power generation and distribution companies and increased the tariff on electricity bill. This will obviously cause more havoc for the ordinary people of Nigeria; it will mean that many Electricity workers will be made redundant. Presently only 10% of rural households and 40% of the country’s total population have access to electricity, this figures is definitely going to drop drastically with increment in the tariff.

In conclusion, Nigerian Workers should rise up against this callous policy of PHCN Privatization. The one-day warning strike by PHCN workers against this policy has shown us what a united action of the workers can do, within a few hours the union leaders were called for negotiation, with some of their demands granted. We therefore call on NLC and TUC to call a one-day solidarity strike in support of PHCN workers against this draconian policy.

Secondly, the final solution to Nigerian situation lies in the overthrow of this useless Nigerian ruling class who have proven completely incapable, for over 50 years of resolving any fundamental problems of Nigerian people. They cannot fund Education because their children are schooling abroad. They cannot improve health facilities because they travel to Germany to treat ordinary headache, Nigerian ruling class can only come up with lame ideas that only benefit their individual interest. With privatization of PHCN comes a higher cost for electricity consumption and with over 70% of Nigerian population living below poverty level, it will definitely inflict more sufferings on the Nigerian masses. Therefore, what is urgently needed is for the Nigerian workers to build their own political party to wrestle power from this degenerate and useless Nigerian ruling class.

As Trotsky explained long ago, what is confronting humanity is either socialism or barbarism, the bomb blast on the independence day celebration in Abuja, the Boko Haram incidence in Bauchi, the Jos crisis are a few examples of barbarism that is awaiting Nigerians, if the Nigerian workers do not take a lead in taking over power from this useless capitalist class, and begins the construction of Nigerian society on a socialist line.