Obviously, there was an earlier agreement between a dominant section of Nigeria ruling class, Nigeria media and the Imperialists, that no matter what the actual outcome of this election is, it must be adjudged the fairest and freest election in the history of Nigeria. This agreement was strictly adhered to by all the parties concerned. Public opinion is moulded along this line, even where malpractices were very obvious, the media and International communities just looked the other way.

Nigerian workers joined their brothers and sisters throughout the world to celebrate Workers’ Day on May 1st. In Lagos State, the celebration was held at Onikan Stadium. Workers trooped into the stadium en masse to mark the day. However, they had a surprise coming, with the newly elected State Governor giving them a lecture about how increases in workers’ wages cause inflation!

The political drama that unfolded with the April 2011 general elections turned out to be all revealing about the real nature and the deceit of the various sections of the Nigerian ruling class; and more obvious was the lack of genuine political alternative to the present rot in society, which a number of critical voters unconsciously sought during the elections.

In truth, the elections were mainly contested by the different sections of the ruling capitalist class in Nigeria, which have their individual pecuniary interests but who nevertheless, in the last analysis, are all committed to maintaining the present status quo that tilts property relations against the mass of workers and ordinary Nigerians.

Read more: Nigerian presidential elections: what do they reveal about the real situation?

The Nigeria Capital City of Abuja has probably never witnessed a traffic jam the magnitude of which occurred on the 15th of October 2010. At the Federal Secretariat Complex and the office of the Head of Service of the Federation, most of the offices remained empty as most civil servants have returned to their homes because of the mammoth congestion.

2011 is here and the Political Parties are warming up for the forthcoming election. But unfortunately, Labour Party which ordinarily was supposed to be the political platform of the working class and the other poor masses in society, due to its enormous potential and strength, might after all not be able to effectively stand as a credible alternative to challenge other political parties, due to its present weak position. In 2007, the party won 1 out of 360 seats in the House of Representatives, without any seat in the senate and just one governor out of 36.

On Thursday, 3 February 2011, workers of Sadhwanis Nigeria Limited embarked on a struggle against the exploitative and inhuman management of the company. The plastic factory is located at Apakun Industrial Estate, Ajao Estate, Lagos.

Nigeria ruling class continues to lose its social base. Rather than this process being reversed, it is accelerating. The main social base upon which this present bourgeois democratic experiment bases itself has almost completely eroded. The ruling class finds itself more and more isolated from the ever-increasing number of Nigerian masses. More and more Nigerians are joining en-masse, the rank of those vanguards of the masses that are correctly

On July 22, 2010, the southeast chapter of the Academic Staff Union of Universities (ASUU) commenced an indefinite strike action as directed by its National Executive Committee (NEC). It is disheartening to note that almost three months later, this strike is yet to be called off; the crux of the matter is yet to be addressed. These Southeast States’ citadels of learning remained shut down due to the hard-line stance of the state governments and their refusal to meet the demands of the striking lecturers.

The Lagos doctors strike action has lingered through the months of September-October 2010 and has expectedly led to a functionless and dangerous situation in all the government-owned hospitals in the state. The doctors had embarked on the strike action after the Governor Raji Fashola-led government failed to accede to their demands for an improved welfare package via the implementation of the new national CONMESS salary award for doctors, review of the highly excessive income tax – the hallmark of the present Lagos government, and the reinstatement of the former chairman of the Medical Guild, who was sacked last year for agitating for the rights of doctors for better deal. Published below is an extract from a contribution of one of the striking doctors, Dr Olayinka M.A, featured in THISDAY newspapers, Friday 8/10/2010 edition.

No doubt, Fashola government in Lagos state means different things to different people. To the elite, who wishes to drive his car without hindrance through a well flowered road, a road that is devoid of poor children hawking the streets, with beggars completely packed off the visible arena of passage; to him, Fashola is a hero. To a poor woman who had lived all her life selling in one corner of the road, a condition force down her throat by immense poverty, with her children hawking all over Lagos at the risk of being arrested by the police. These children suppose to be in school, but public education has completely collapsed. When she is ill she has to go to native doctor because public health is dead; a small apartment she stays will either soon be pulled down or is already demolished in the interest of Mega city project; to her, Lagos has never been so hellish as it is now. Of the estimated 18 million Lagosians, 11.55 million (64.2%) are living below poverty level, under genuine democracy who really own Lagos?

The Nigerian Labour Congress (NLC) recently set up a Commission to investigate the extent of workers’ participation in and desire for the Labour Party. In spite of the Labour leadership’s claims that Nigerian workers do not desire a party of their own, the report of the investigation revealed the contrary.

Trotsky once wrote, the capitalist regimes toboggan to disaster with their eyes closed. This statement perfectly describes the political situation in Nigeria. As we have stated several times before, the objective conditions require to maintain ongoing bourgeois democracy has completely eroded few years ago; it has become a mere empty shell, a corpse waiting to be buried. It is an apparatus that is incapable of living and yet unwilling to die. So as to artificially extend its lifespan beyond its limit, the present regime has been clinging on anything on its way. The recent casualty of this clinging game is electoral reforms.

This article first appear on the December 2009 Edition of the Workers' Alternative.

No doubt, the Nigerian working class is the largest and most powerful singular force in the land. This undisputable fact is confirmed further by the fact that nothing can work without workers; this reality does not just apply to Nigeria but it is also an international reality. Over 10 million workers are in organized labour in Nigeria, NLC and TUC. Millions of Nigerian workers who are yet to be unionized and millions other poor strata of the society are natural allies of workers and look towards the organized labour for support at most times. The massive support all the general strikes called by labour against fuel price increases and deregulation confirms this fact.

Martins Onovo (leader of Strategic Union of Professionals for the Advancement of Nigeria, SUPA) could end up been another hero in the eyes of millions of toiling masses in Nigeria. What did he do? He came out with more facts, figures and arguments that further confirm that fuel prices increases can never work and has never worked in Nigeria since the first increase on Oct 1 1978 by the then Obasanjo military regime. And that the current plan to totally deregulated would not only fail but would lead to more terrible conditions for the economy and masses as a whole. 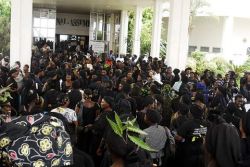 Read more: Jos Killings - A temporary episode or a symptom of a “failing state”?

The physical ill-health of the present President of Nigeria is compounding the crisis of the regime. But whoever the ruling class replace him with, the anti-worker policies will stay the same. What is required is for the Nigerian Labour Party to break with the bourgeois elements and pose as a completely independent party of the working class.

After the blow to the Nigerian economy by the sharp fall in the price of oil, due to falling demand on a global scale, now that there are signs of recovery in the advanced capitalist economies, the price of oil has been rising for some time, although not reaching anywhere near the peak of over US$140 per barrel. Thus, Nigeria is also set to grow, but all this hides the real underlying weaknesses of the Nigerian economy.

Read more: Nigerian Economy ‑ Is the Worst Over?

The 3rd National Convention of Labour Party took place in Abuja on Saturday 12th December, 2009. The convention was divided into two sessions. The first session was the presentation of paper on the electoral reform by formal senator, Jonathan Zwingina, Justice Mustapha Akanbi ICPC Chairman, and lastly, a solidarity message by the General Secretary of Nigerian Labour Congress, John Odah. The second session was dedicated to constitutional review, dissolution of National Executive Council and election of new National Executive Council of the Party.